In 2016, my husband and I bought a new car. It’s  Ford Escape (we aren’t big spenders, no BMWs or Caddys for us, at least not in this current life), but I splurged and opted for leather seats and a sun roof. This was our first post-child-rearing car, it was the one I wanted to drive for a long time, and I kept its interior clean. No jelly smudges on the upholstery, no milk stains on the carpet.

Oh my stars- milk in the carpet! Once, when my kids were little, I smelled something truly vile in my car, a little red Ford Escort. Or maybe it was the white Ford Tempo. It’s all a blur (though it’s clear we’re loyal Ford folks). I searched and searched, until I found a bottle under the driver’s seat. The milk in it had curdled, was leaking gas and fluid, and smelled to high heaven. It was rank like a boys’ locker room laundry hamper; like rotten, sulfuric eggs or fresh skunk spray on a humid morning. The smell lingered for months, no matter how much scrubbing or Resolve I used.

This new cinnamon-red, tan-leather-upholstered, luxurious clean crossover was my reward for all the years of driving three kids around, pulling through McDonalds to grab them sustenance before a game, piano lesson, or orthodontic appointment. Since we were new empty nesters, we anticipated a good five years of clean, quiet road trips to little wineries and out-of-the-way art galleries. I even got my nose pierced to celebrate the Empty Nest! I was ready to rock!

Just last week, while cleaning out the SUV, my husband found a french fry wedged between the seats. A french fry.

You see, our life took a major shift lately. A good one, a happy one, but still: a shift. We became grandparents. And not just grandparents of one little newborn. Our daughter’s partner has two children, and so we are insta-grandparents (just add white wine and stir).

Thrown in the deep end, so to speak. In it up to our eyeballs. Trial by fire. Zero learning curve.

So now, we have added trips to the children’s museum and Chik Fil A back into rotation.

My husband just glommed right onto this grandpa thing. Maybe it’s his silver beard. Quite possibly it’s his jolly, extroverted personality. More likely, it’s his big heart. I took a little time to adjust to the idea. I am an introvert who likes neatness and order and quiet. I willingly relinquished those things while raising a family, and I was pretty excited about having them back for a bit. Also, being a grandparent means you’re in phase three- the last phase- and that’s sobering. Then I met the kids who would be joining our family, and fell in love. The girl is seven, a second grader who reads well and instinctively mothers her little brother, a four-year-old with a glimmer of impishness in his eyes. Now I couldn’t care any less about a french fry in my car.

There’s a single Lego sitting on my fireplace mantel. I found it under the TV stand while looking for the remote, just sitting innocently on the hardwood floor, thankfully out of stepping-upon range, waiting for its owner to get back down to floor level and play his games of imaginary build and destroy.

A friend teased yesterday, learning about my newborn grandchild, “I bet you have your own car seat in your car.” I do. I bought a car seat, a pack-and-play, and a swing. There’s baby shampoo, formula, diapers, and wipes in what has been my yoga room and is now a shared space. My asanas are now kept company with Pampers and that wonderful smell of baby shampoo. And atop my refrigerator I have current family photos with four new and welcome faces. 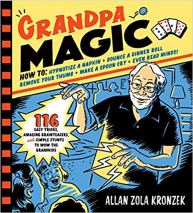 There’s no instruction book for being a grandparent, though I did stumble across an amazing book called Grandpa Magic: 116 Easy Tricks, Amazing Brainteasers, and Simple Stunts to Wow the Grandkids while at Barnes and Noble(see below for link). It was one of my husband’s favorite Christmas presents. I found him studying the tricks Sunday afternoon in his home office. He has big plans brewing, I think.

The kids? They’re the easy part. Spending time in the back yard playing school, coloring pages, bubble baths? I know how to do that stuff, though it’s exhausting. One afternoon of helping them ride their new bikes in our neighborhood wiped me out. Now I understand why my in-laws looked so frazzled after my kids visited.

I fear that the hard part is going to be knowing when to help my daughter and her partner and when to back off; when to offer advice and when to hush. When to let them stumble while they figure out the best way to parent. Parenting hurts. When your child is sick, when someone hurts their feelings, when they fail, your heart aches. I don’t think that’s going to get any easier.

I just want to be the safe place. The lap that offers the best cuddles for the little ones and the ear that provides unerring support and love for their parents.

Maybe I’ll even practice a magic trick or two. Everyone needs a fairy grandmother with a little magic in her wand.