Women are killing it in 2018. Killing it. Though we still haven’t completely leveled the playing field, it’s getting closer. Oprah at the Oscars, “Wonder Woman,” and the #MeToo movement which resulted in the Silence Breakers being named as Time Magazine’s most recent Person of the Year have been highlights. On a personal level, I am finishing two book drafts- those are major accomplishments for me.

And on the fun front,  I got to see “I Feel Pretty” just this week, and I loved it. Before the movie started, women and only women (most at least 30 years old- the humor is probably only funny for those of us who have lived a little. The marketers knew their audience, the first glimpse I got of the movie was on Pinterest) got comfy and ordered lunch while watching a preshow of Amy Schumer highlights: clips from “Trainwreck” and “Snatched” were interspersed with her comedy shorts. The movie trailers were for “The Spy Who Dumped Me,” “Ocean’s 8,” and the “Mamma Mia” musical sequel. All films about women who make us laugh. “I Feel Pretty” made me laugh. A lot. It also made me cry.

That’s the progression for so many women. When we are little girls, we don’t doubt it. We play dress up in our mom’s heels, smearing lipstick on our faces and striking poses for photos. We throw on a pair of shorts or a swimsuit for play without a second thought about our bodies. But it changes somewhere along the way, doesn’t it? At least, for a lot of us. Some charmed angels manage to stay whatever society says beautiful is all the way through childhood and adolescence- shiny hair, clear skin, thin. But most of us go through some awkwardness, and that’s where our hearts and psyches stay. 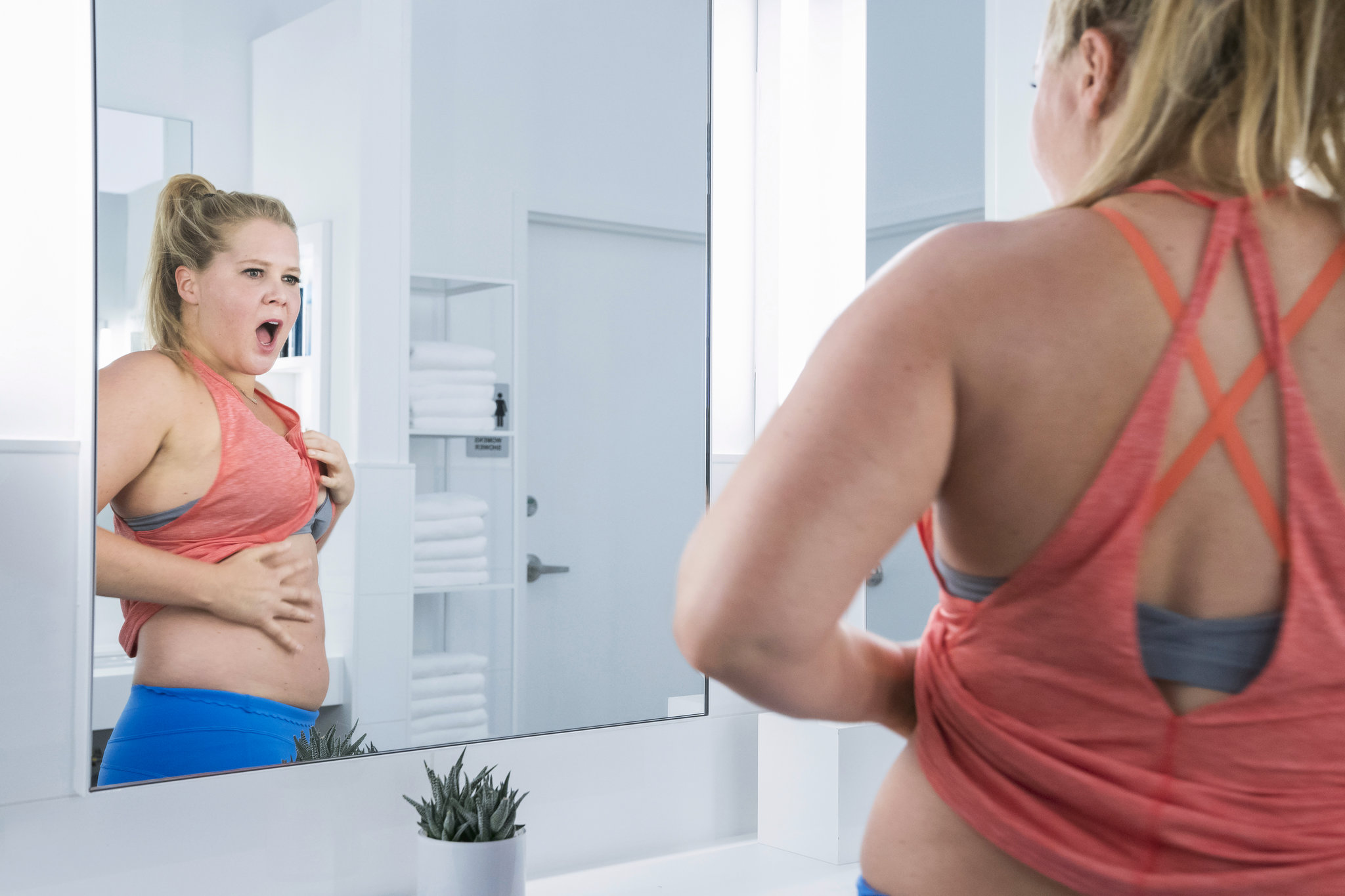 And so we meet Renee Bennett, Amy Schumer’s beleaguered Millenial in the new release “I Feel Pretty.” She’s watching a YouTube tutorial, trying to recreate a “faux-hawk” hairdo. It’s not going great. And she gives herself a long, long look in the mirror. It made me tear up, and here’s why: without speaking one word, I saw in her eyes exactly what she was saying. Because I say it to myself on a daily basis:

To see her undress and take in her reflection after being fat-shamed into leaving a clothing boutique was, to be honest, gut wrenching. I teared up again here. Every time she looks in a mirror her shame radiates. Until the magic moment when it doesn’t. In a moment that is an acknowledged meta nod to the Tom Hanks gem “Big,” Renee bonks her head in a fall off the bike in her Soul Cycle class and wakes up completely convinced that she is fantastically gorgeous. And she is- but the trick is that nothing actually changed. She is the exact same person, but instead of an inner monologue of self shaming, she caresses her size ten legs and declares them perfect. It is her perception that has changed, not her actual appearance, though she doesn’t know it.

We watch what happens when this seemingly average, thicker girl owns her own beauty. She rules. And she falls in love. She makes courageous choices.

I feel charming
Oh, so charming
It’s alarming how charming I feel!
And so pretty
That I hardly can believe I’m real!- Maria, “West Side Story”

Make no mistake- this film is not “The French Lieutenant’s Woman.” It’s not going to be nominated for any Oscars. Schumer is not a Streep-level actress. But she’s funny. Really, really funny and fearless. The bikini contest scene was uproarious- the theater was rocking at that point. Watching Michelle Williams, who is an Oscar nominated actress, play against type was utter joy. I fell a little in love with Rory Scovel, who played a slightly bewildered and really sweet love interest. Aidy Bryant and Busy Phillips are the trusted sidekicks. I was so relieved that Aidy’s size was never mentioned. Not once. Not even as they created a triple-threat online dating profile. The audience that I watched with was completely female, and the laughs were loud and frequent, grounded in the reality that so many of us have lived: the magazines may not see us as goddesses, but that’s okay. We are goddesses even without their permission.

The Dove company did a really great campaign not too long ago, its message was just that- it’s how we see and define our own selves that matters. They did a hidden camera video of women who had to choose between two doors to enter a building: one labeled “Average” and one labeled “Beautiful.” I cried when I saw it. I cry to even think of it. Because almost no women chose the beautiful door. Their faces fell, in fact, as they made the choice. Heads hung as they walked in. Why do we do that to ourselves?

“I Feel Pretty” matters. It really does. It reinforces, it shouts, the truth that we are all beautiful. We all struggle with romantic relationships, friendships, and careers. Yet we are all pretty- fat, thin, tall, short, chic, basic, brown, white. Oscar trophies? No. Big laughs and happier ladies? Hell yes.